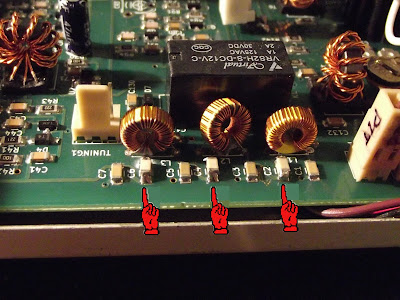 Putting the BITX40 Module on 60 Meters
by  Don Cantrell, ND6T


I have been enjoying the BITX40 with  the AD9850 DDS VFO but when the Raduino was announced I was overwhelmed with curiosity. I ordered a new BITX complete with Raduino. What would I do with another 40 meter BITX? How about 60 meters?


60 meters in the U.S. is pretty limited, currently only 5 fixed channels and limited to 100 watts effective radiated power, and so it is seldom addressed in commercially built gear. It has good propagation for nearby communication and there is a possibility that a new segment (not channels!) will soon be authorized for QRP operation. The BITX would be perfect since it is easy to program for new allocations.


While waiting for the new BITX I considered conversion strategies by using the AADE filter modeling program. First, I modeled the existing 40 meter RF bandpass filter and then modified it for 60 meters. My first idea was to change just the series capacitors in the original. It worked!

The nice curve to the right (in black) is the original RF band pass response. Changing the three series-tuned capacitances produced the response to the left (in red). Yes, it is twice as broad, but that is what I wanted since it would include WWV and a number of frequencies that I enjoy.


The conversion does not require removing any hardware. Just add four common value capacitors! Parallel the three 100 pF capacitors (C2, C4, and C6) in the RF bandpass filter with 100 pF capacitors. I  just stacked them. The fourth additional capacitor is a 220 pF capacitor across L7 (in the transmit low-pass network) to attenuate to second harmonic (now > 50 dBc). Voltage ratings are not a problem.


Stacking is done simply if you have some 1206 sized capacitors. Just sweeten the solder fillets on each end of the target capacitors with just a touch of extra solder. Place the additional part atop the target part. Hold it down while re-heating the solder at each end and you will see the capillary action pull the solder up onto the ends to complete the joint. Ta-DA!


No SMD capacitors in your junk box? Just use ceramic disks, then. The 220 pF needs to have leads  in order for it to reach across the L7 terminals and it goes underneath the board. You can use a ceramic disk like I did, but a silver mica or any other RF type would work well.


That was too easy. The only thing left to do is to load new operating software and put it on frequency.


I wrote an entirely new sketch for the Raduino. Instead of tuning a band, we now have (currently) just five channels. The new program has you tuning the knob to the far clockwise end to start the channels  changing from #1 to #5 and then starting at #1 again. I will add other channels for WWV and the broadcasters to suit me and will institute tuning when the allocation is approved in this country. This way I don't need to modify more hardware. As it now stands, I can just turn the knob to where it slowly  scans all of the channels and walk away until I hear activity. To stop channel selection, turn the knob counter-clockwise anywhere out of the channel select zone.


I will provide the 60 meter sketch to anyone that is interested free (of course) if they will write me at ND6T@ARRL.net unless Bill or Pete can think of another way for me to post it. You can use it as a basis for any kind of experimental platform that you would like since it is very small and simple.


To put it right on frequency it would be best to use a frequency counter. This is due to the variations in BFO frequencies and the reference oscillator on the Raduino module. You could do it without  equipment by “change and re-try” but a counter (even a borrowed one) would be easier.


This calibration is the subject of a previous article. 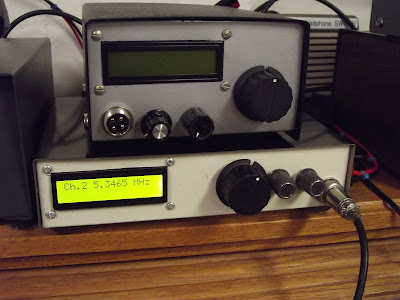