Another Approach to RF Gain Control (on ND6T's BITX60 Module) 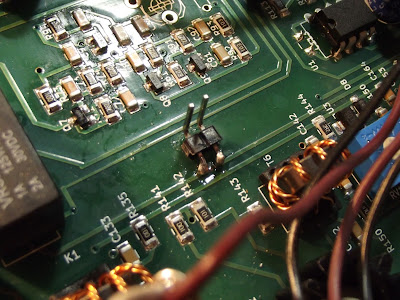 Another Approach to RF Gain Control
by  Don Cantrell, ND6T

I am lazy. So on my first BITX I devised the simplest way that I could think of to install a usable RF gain control.  With so little effort, I was pleasantly surprised that it worked so well. Still, the range was not spectacular, just 17 dB. Could it be improved upon with more (please excuse the following four-letter word!) work?


Most of the best QRP designs have used a simple potentiometer at the receiver input. Simple is good, and the arrangement has proven itself to be both effective and cheap. The problem is that the only place available for it in the BITX design that is not shared with the transmit function is the connection between  pins number 14 on the two relays. Without any components in the path or any solder pads (other than the connections to the relays beneath the board) I had to do surgery on that beautiful board. Still, I had to try the idea.

Locating the conductor run on the top surface of the board, I used a hobby knife to carefully scrape the solder mask from about 5 mm of that trace  toward the front panel from R143. Not the trace that connects to R135 and R144, but the adjacent long one, the one that disappears beneath the relays. Be careful not to scrape too deeply, just to where the copper is clean and bright enough to accept solder. In the center of that cleared zone carefully remove a 1mm section of the trace, separating the path. Tin both sides of the cut and use an ohm meter to ensure a clean separation.


As homage to Ashhar Farhan's legacy of plug-in connections on the BITX40,  I removed a two pin portion of right-angle pin connector stock to fabricate a make-shift header. With small pliers I bent the short pins down to make contact with the foil when the plastic part of the connector was flush to the flat surface of the board. A drop of gel cyanoacrylate glue helped hold it in place. I soldered the previously formed short pins to the trace and was ready for the control installation. 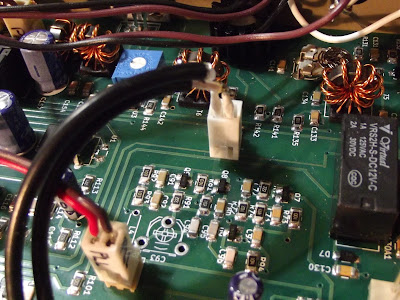 Unlike my original RF control project that used just DC supply current, this design should use shielded cables to and from the control. I used RG174/u miniature coax, grounded at the low side lug of the 1K ohm potentiometer (both runs), the lug on the other side will go to the center conductor of the cable going toward K1 (that's toward R142). The other coax will connect to the wiper on the pot. The connector ends of those coax runs will solder to a two conductor female plug like the BITX uses for power, antenna, and speaker. That plug connects to your new header.


This arrangement gives nice, smooth control of 26 dB on my build. That is a lot of effort for just the additional 9 dB of control. However, now for the good news: You can still connect a switch between R15 and R16 (my previous RF gain control project) and use that as a 17 dB attenuator. That would give a 43 dB total attenuation!


If you choose to remove the control you can use a shorting plug on your new header to restore the radio to normal receive. If you want to install a proper Automatic Gain Control in the future, this jack might prove quite useful.


It could be worth all the trouble after all.
de ND6T