Putting the BITX Raduino on CW 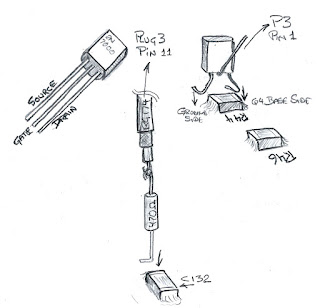 
Although the original Raduino v 1.01 sketch included a CW mode I wasn't pleased with the signal produced from the side tone insertion into audio. Even when filtered to where it sounded acceptable there were multiple artifacts accompanying the tone. Since I like a 700 Hz tone there were three additional harmonics spread across the spectrum within the 2.8 KHz spectrum. These are attenuated by the degree of filtering but unless I used active filtering they were quite evident. Additionally, there was the suppressed carrier and the opposite side band both showing at several milliwatts. All this would not be detectable if my signal was quite weak, but there are many times when nearby stations will be annoyed by these “companions”. 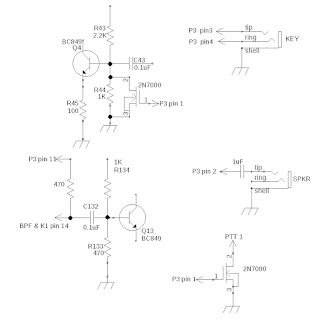 I decided to use the CLK1 output of the Raduino module (P3 pin 11) inserted, at operating frequency, into the RF Power Amplifier predriver (Q13). I used a 470 ohm resistor soldered to C132 (either side, CLK1 has a blocking capacitor) fed with a shielded RG-174/u cable. I grounded the shield at the synthesizer at P3 pin 12 but left the other end open, dressed back ½” , and covered with tubing. The 470 ohm resistor throttled the CW output to 5 watts. If you want to chance it, a 220 ohm resistor at that point will output 10 watts. I prefer 5.

The T/R relays are keyed by placing a 2N7000 NMOS transistor from ground to the PTT pin on the microphone jack. Source to ground, Drain to PTT, and Gate to P3 pin 1 of the Raduino.


Another 2N7000 is placed across R44, the base of Q4 to ground. Source to ground, Drain to the base side of R44, and the Gate tied directly to the gate on the 2N7000 T/R driver that was just installed. This transistor disables the post-mixer transmit buffer in order to eliminate the remaining carrier and anything coming in from the microphone.


The result is a clean and clear CW tone.


In my software I use a side tone that matches my transmit offset. A 700 Hz offset will produce a 700 Hz side tone, making it easy to spot my transmit signal in the receiver. This side tone appears on P3 pin 2 on my build and is injected into the speaker jack through a 1 uF capacitor. Those users who have chosen to remove C113 from the audio output amplifier can use that capacitor: Just lay it on top of the jack and solder one end to the “tip” connector pin (the brown wire). Want a different level? Then either change the capacitor to a different value or put a resistor in series with the 1 uF. Another variable resistor on the front panel, perhaps?


I wrote a primitive little iambic keyer routine and placed it in a “while” loop. The structure is timed by a simple iterative count and jumps back out to normal operation after about one and a half seconds of inactivity. That is the “semi-break in” time out and is changeable in software to meet your needs. The key inputs are fed into P3; pin 3 for the dits, pin 4 for the dahs.


Two transistors, one resistor, and a capacitor. Less than $1 USD in parts!


The CW routine is called by holding the paddle to either side. The relays are operated and the fun begins. Speed is set in the start of the program as a variable, “wpm”, and is fixed on my simple sketch. You can set up a simple pot (just like the tuning control) to generate a number to be directly scaled to the word-per-minute rate and place that control right on the front panel for speed control. Place the WPM rate on the second line of your display. Class!


You could do the same thing with the offset/side tone frequency. Go crazy and amaze your friends!


I can provide a current copy of the 60m sketch that includes the CW program. It is written in simple Arduino, no fancy C++ calls. I like simple. Also included is the added tuning of 5 to 6 MHz. Nice to calibrate with WWV, listen to trans-oceanic aircraft and short-wave broadcasts. Write me at ND6T@ARRL.net.  An adaptation for 40 meters will also be available when I get to it.


It certainly serves as a successful proof of concept. It is not, however, a great CW transceiver. Yet.


*       Activation of the CW function is awkward and slow. It is delayed by the iteration of  the main loop, including the display. Solvable by an interrupt routine, perhaps?


*          Keying waveform is too abrupt. Perhaps an keyed integrator in the PA power plug circuit?