A Band Scope for the BITX 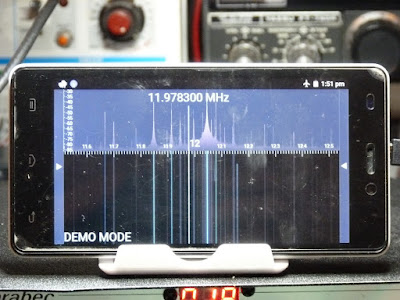 The use of an RTL-SDR dongle with a discarded Android phone as the display seems to me to be a very BITX-appropriate use of road-kill technology.  Bill N2CQR


I have explored several very simple ways of implementing a band scope on my BITX. To test the concept I am using HDSDR on a PC and an HF converted RTL SDR dongle (a la Sprat 162). We can turn the sound off on our SDR software as we are only interested in the display. I have also tested it in demo mode on an android phone using SDRTouch as seen above.


Method 1 implementing a band scope on the first IF stage (output of Q2). This gives a classic tunable Pan-adapter. You tune your SDR software (HDSDR or SDRTouch) to the IF frequency 12Mzh and you will see a band scope and waterfall display.  You tune stations in the normal way on the BITX and you will see that once you resole the LSB signal on the BITX it resides within the 12Mhz pass band near 12Mhz on the waterfall.  See below you will also see that the lower portion of the 40M band is to the right note the CW section 1260 – 1280 and the high end of 40M is to the left  this is inversion due to my use of high side vfo. This will not be he case if you are using the conventional low side VFO ( the waterfall will change if you use high side VFO to change to USB as implemented on the Raduino using the fixed BFO crystal, if that’s what you use). What you see on the scope is not what you get in that every thing is referenced to 12Mhz you have to do a conversion in your head to know where you are within the 40M band, but it does show you the activity on the band which you can tune to via the BITX. 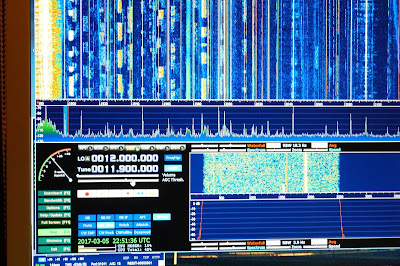 The next image shows the mess the waterfall gets in to when you tune the band. The trick when tuning is to ignore the waterfall and concentrate on the peak in the band scope of the signal you want to listen to as it moves into the 12Mhz pass band when tuning the BITX. 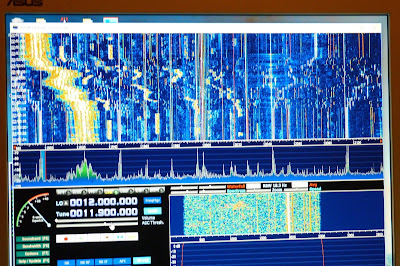 As previously indicated the hardware mod itself is very simple, tack a 10 or 20pF cap (whatever low value you have) onto the crystal side of C23 and connect this to your dongles antenna connection via screened lead. 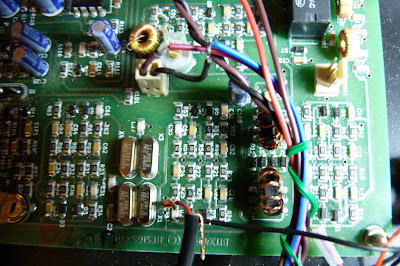 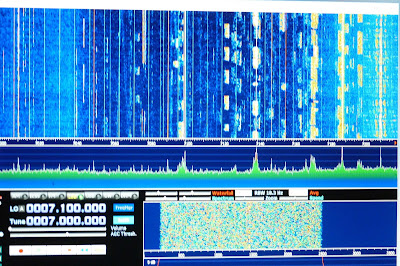 Again the hardware mod itself is very simple, this time  tack a higher value cap 10nF onto C13 and connect this to your dongles antenna connection via screened lead. 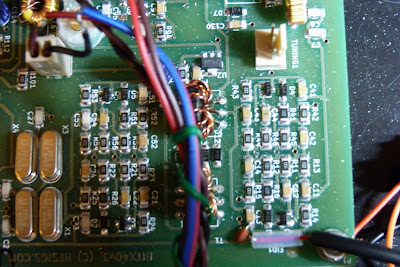 The main downside to methods 1 & 2 are the amount of spurs that can be seen in either of the displays as above. This is a known issue with these cheap RTL SDR dongles and not easy to overcome. However, most of the spurs seem to be generated within the BITX. This is hardly surprising given that I'm running an arduino, which has its own internal clock, which is driving an SI5351 producing VFO and BFO frequencies, harmonics from these and those produced by the RTL devise itself will be generating and mixing all sorts of other harmonics. Contrast the above with the SDR on its own antenna not connected to the BITX. Hardly any spurs see below. This would be another option (method 3) to use the dongle with either a PC or android device as a band scope using a separate RX antenna. 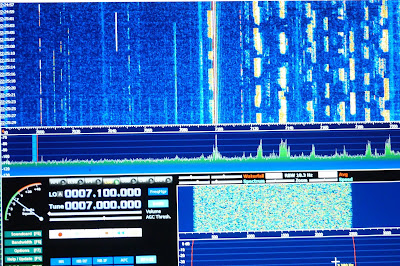 I have loaded SDRTouch on my android phone and it works but only for 60 seconds in demo mode. Not really long enough to test and fully evaluate the functionality. I have to pay£7 for a key to use the full spectrum functionality. I'm not sure at this stage which android devise I want to run it on or the use I'll make of it. But I may consider it in the future. This is why most of my testing has been carried out via HDSDR on a PC. I have tried other android SDR apps but SDRTouch seems to be the only one to offer I or Q channel inputs necessary to operate HF modded dongles.


Whilst methods 1 & 2 work they would benefit from further experimentation. Reducing or eliminating the spurs would be nice but difficult. I have since found that screening the Arduino and using coax instead of just screened lead to connect to the RTL helps. As it stands even with the spurs it still gives useful band information. A band scope found on $2000 plus rigs it is not! But for the outlay of $13 for an SDR dongle and an android device it could be a useful addition to the BITX.


In summary, both methods are very easy to implement but I feel that method 2, although not a classic tunable band scope, is probable the easiest option from a user perspective. Try it on your PC or android and see what you think.

Post Script check out these V3 dongles from the RTL-SDR.com people. They have improved screening, spur suppression, lower noise floor and are already modded for HF. It's only 19 of your American bucks.
http://www.rtl-sdr.com/new-rtl-sdr-blog-units-now-available-in-store-hf-via-direct-sampling-software-switchable-bias-tee-less-noisespurs/